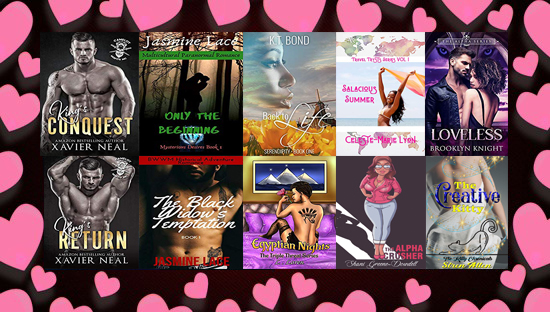 Happy July!
I hope you’re ready for some hot alphas. This month’s featured authors are bringing the heat. 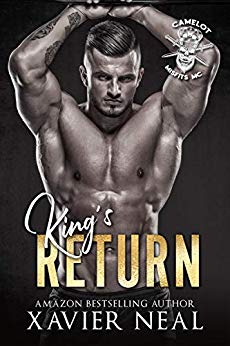 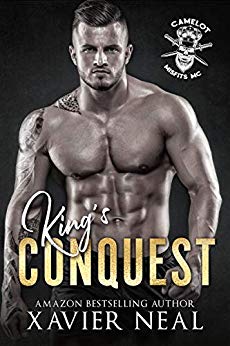 The Misfits MC is known for maintaining the balance.

However, when Adonis “King” Arthur is forced to return home to help rescue a fellow member’s sister from a rival club, he quickly realizes the place he held in his memory as a haven is anything but….

*WARNING: This book ends on a CLIFFHANGER.

The cavalry is ready.
And they’re riding steel horses…

The Misfits MC is known for maintaining the balance.

However, when Adonis “King” Arthur embarks on the conquest to completely destroy a rival club, he unfortunately realizes the cost of victory may be too high….

*WARNING: This book ends on a CLIFFHANGER.
https://amzn.to/2XgjhPg 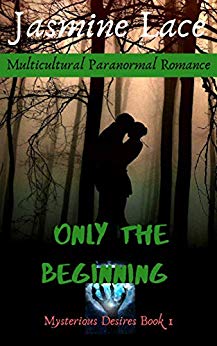 “I don’t believe in scary bedtime stories like the boogeyman!

I’ve always found that there is an explanation for everything. At least until I moved here.

Here, there is something about this place that doesn’t make sense. It has to make sense. I have to know the answer why.”

Chanel Carter moves to Northern Spain to get away from her ex-husband and to earn enough money to start a new life with her young son.

But when she arrives to teach English at a summer camp in La Casa de Asturias, things don’t seem to add up. Nightly sounds of nails scratching the walls, a false image of a dead girl in the fountain, and constant disappearances of strange characters are only a few of the many odd things that have been occurring at this country manor.

Chanel is determined to find a rational explanation for all these peculiar incidents. Can her attraction to the handsome and mysterious Professor Rodrigo Garcia Perez distract her from finding out why things there aren’t what they appear to be?

1656. Captain Scarlett, or her more popular alias, the Black Widow, has stumbled across a handsome stranger on an enemy ship. On top of his odd ways and vague explanations of his past whereabouts, the stranger looks similar to Scarlett’s lost love. Plagued by questions and the coincidence that a new man has shown up right when her plans keep getting sabotaged, Scarlett decides to take him aboard her ship to get more answers. Can Scarlett seduce the truth out of him without confusing her past love with this doppelganger? Or will this potential spy get the better of her?

Trekker, Sebastian Graham never thought that a visit to his big sister’s museum would catapult him into the 17th century at the sharp end of the Black Widow’s blade. Raids, sword fights, powdered wigs, no internet service, and a probable death by small pox makes Sebastian worry that he won´t survive the violent life of piracy. He is desperate to return back to his own time. But he has no idea how to do it. Can he find a way to get back to the modern day without falling for this red haired, caramel skinned beauty, or worse, getting himself killed? 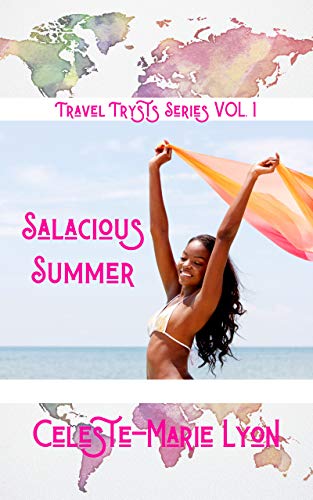 JOIN FOUR COUPLES THIS SUMMER AS THEY FIND LUST AND LOVE ACROSS EUROPE.

BRIANNE AND KEN, A YOUNG MARRIED PROFESSIONAL COUPLE FROM LONDON HOPING TO RECONNECT ON A WEEKEND TRAIN TRIP.

A BERLIN NIGHTCLUB SPARKS A FLIRTATION BETWEEN KATRIN AND PETER THAT ESCALATES QUICKLY ON THE DANCE FLOOR.

SABINE AND MARK, EXES WHO BUMP INTO EACH OTHER IN PARIS AND START TO WONDER WHAT IF.

ANGEL, A SOLO TRAVELER FROM AMERICA AND HER HELPFUL ADMIRER ANDRIS WHO SEIZES AN OPPORTUNITY TO TALK TO THE BEAUTIFUL WOMAN IN THE BUDAPEST CAFE. 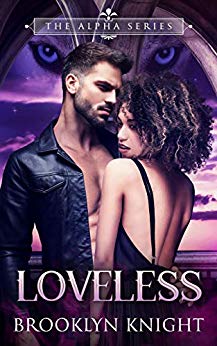 What does a girl do when love hurts? She becomes ‘Loveless’.
My sister, Sasha, says she’s in love with Remi Moretti, but there is no way it can be true. I’ve protected her since we were kids in foster care, so nothing will stop me from rescuing her…
Except, maybe, the man who answers the door when I arrive at the mansion.
Vince Moretti is long, and lean, and impossibly sexy; and he is… doing something to me. I’m supposed to be loveless, yet when this man touches me, my body and soul erupt. I used to think that Loveless was the answer, but suddenly, I’m not so sure.
What does a wolf do when he finds the girl of his dreams? He makes her fall in love.
There is a woman standing at the front door of the mansion, and immediately, I know she belongs to me. In fact, Shenique Wilcox is the woman I have been waiting for my entire life. But there is something about her aura. It is angry and closed.
It is just like mine.
When Shenique reveals a plot to separate my brother from his mate, it does not take much for me to get onboard. Love has hurt us and retribution is in order. But as our undeniable passion waxes stronger, suddenly our objectives become blurred. Now, it is not my brother I wish to defeat. It is Loveless itself. 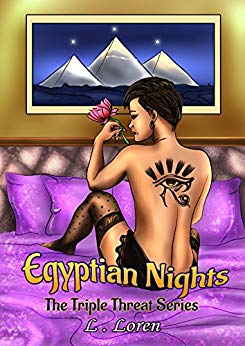 Once upon a time there was a beautiful young woman named Egypt, and she loved sex. Cursed by her mother’s dying declaration, she thinks she is unworthy of love. Locking her feelings inside an impenetrable ice block, she hides behind casual sex. Aided by her Naughty Fairy Godmother, she creates a playlist of rules to live by to avoid a broken heart.

When the ruggedly, sexy businessman, Harper Beckmann enters the restaurant where she is the executive chef, she feels drawn to him in ways she never felt before. When he denies her offer for a casual hook-up and offers to take her on a date instead, she is intrigued. Unable to resist his charms, she allows him to break all of her rules, including kissing on the mouth.

Harper has been playing the field since his fiancée left him for his best friend. A romantic at heart, he longs for the love of a good woman. When he meets Egypt, he knows instantly she is just what he needs to cure his aching heart. If he can break down her walls and get her to admit she loves him too, Beckmann may just be the one to break the curse. 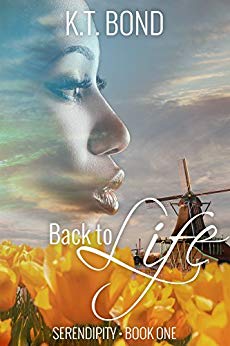 When up-and-coming novelist and freelance editor Karen Mullings leaves the States to relocate to England, where her older brother lives, she is not in the market for love. After three marriage proposals, none of which came to anything, she has sworn off relationships while she gets her life and her heart back in order, and for the most part, she’s been very successful. Until she meets Peter van der Meulen, a Dutchman who teaches English in a secondary school in Leeuwarden, and suddenly her calm and ordered life is topsy-turvy again. He’s handsome, which doesn’t hurt, but it’s his gentle, quiet spirit, his intelligence, his romantic nature, not to mention the heat that grows between them, that batter away at the walls she has erected around herself. And she cannot withstand his allure.

No more can Peter stop himself from wanting the delectable and enchanting Karen. A widower of some four years, he had been unhappy in love for a while before his wife’s death from cancer. He doesn’t expect that an accidental meeting in an Amsterdam hotel will introduce him to the woman who will reawaken his heart. From the moment she bumps into him, forcing him to hold on to her to stop her from falling, Peter is hooked, and over the next few months, he finds ways to keep her close, while he opens his heart to love again. She bewitches him and he could not be happier to find himself under her spell.

All it took was one stroke to spark her creativity.
Career wise, Willow Thompson has been struggling for a while now. However, after an unplanned girls’ night out and a surprising purchase, things begin to look up for her. Not only in her work life, but also in her personal life. Rejuvenated, she’s feeling brave enough to stand up to her new boss and ex best friend, Kang. However, standing up to him is the easy part.
Falling for him is what’s going to get her into trouble.

He thought he was over her. He was wrong.
Kang Kyung-Jun has only been in love once in his entire life. The person he fell for was his former best friend, Willow. Her rejection shaped him into the cold calculating businessman he is today. When the opportunity arises for him to be the new general manager of the company she works for, Kang jumps at the chance to be the boss of the woman who crushed his heart. However, his plan starts to backfire once he’s in her presence again. The longer he’s around her, the more the icebox he calls a heart begins to thaw.

Now that he has her in his life again, will he fight to keep her close to him?
Or will he reject her, the same way she rejected him?

Get ready to purr with Kang and Willow.
This is one book in The Kitty Chronicles. Purchase all seven from participating authors for a sizzling summer read!

“We were standing chest to chest in a standoff. Before I realized his intention, he lowered his head and dropped a kiss on my lips. It was brief, but he was close enough for me to inhale his masculine scent intermixed with cologne. I was shaken, and it took me several seconds to regain my composure to slap him across the face.”
~*~
Ward Levine is overbearing and charming.
When he strides onto one of my sites and announces he wants to buy my company, he doesn’t know he has met his match.
I’m Myra McBride, and I own M & M construction, one of the top construction agencies in NYC.
When I walk into a room, people stop talking.
I’m well respected and equally connected.
Dealing with Ward will be no different.
It doesn’t matter that his uncle is a senator and his family is filthy rich.
We’re neck and neck with the same attitude.
Neither of us will back down easily.
But once sparks start flying, who will break first?

Enter this month’s giveaway for a chance to win one of three prizes.