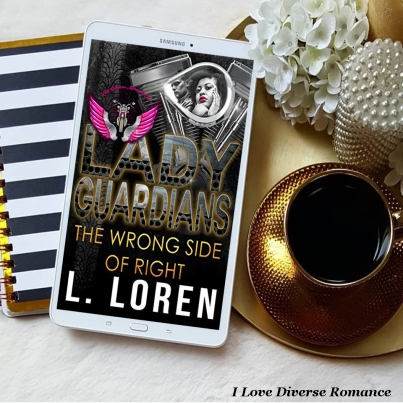 Birmingham, AL has been a hot bed for civil rights since the 1960s. The Lady Guardians Motorcycle Club has been instrumental in continuing the cause today. As vice president of the Birmingham chapter of the Lady Guardians, Lark ‘Lil Mama’ Decker is an integral part of this fight, especially when it comes to police brutality. Things get tricky when a Caucasian security guard saves her from being accosted by a group of aggressive teenagers. Lark finds herself enthralled with this man as they launch into a whirlwind relationship.

Fenton Knoll is smitten with the pint-sized beauty from the first moment he lays eyes on Lark. Too bad she hates cops. When he delays telling her that he is not just a security guard, but a full-time officer in the Intelligence Unit, he is playing with fire. An unfortunate shooting involving a young, black single mother exposes his secret and launches Fenton into the national spotlight, as he fights for his freedom.

Lark has to choose between believing the love of her life, who has lied to her, and her club sisters, who have taken the side of the victim. Both sides believe they are justified in their position. Placed in the middle of a racially charged case, Lark must determine who is standing on the wrong side of right.

This BWWM novel is raw, yet sexy and ends on a HEA.

I called Big Sexy and asked her to have one of the prospects bring my bike to me. I planned to give her a ride back to the clubhouse on my way to the gym. I didn’t expect Big Sexy to accompany the prospect. I certainly didn’t expect her to run into Fenton doing his mad dash escape to get to work.

“Oh, so you’ve been too busy laid up f*cking to come and get your own bike. You got me out here playing delivery service and shit.”

“Don’t start. Plus, I didn’t ask you to come. I thought you were sending the prospect.”

She placed her hands on her considerable hips and pursed her lips. “And miss Dirty Harry’s escape? Not in a million years. I don’t even have to ask if he made your day. Your ass is walking funny and you’re glowing. That’s the mark of a well fucked woman if I’ve ever seen one.”

“Yea, but I’m right though. Tell me I’m lying… Crickets. That’s what I thought.”

“Okay, you got me. I was a big ass slut this weekend and I loved it!”

“So, you were locked up with Dirty Harry all weekend? Well, spill the tea. Just how dirty was he?”

I burst out laughing at her silliness. Big Sexy always had a way to make me laugh. We went inside, and I gave her the rundown on what took place since I left the clubhouse Saturday night. I called a car service for the prospect so she wouldn’t need to sit outside waiting for us to finish. I didn’t know her that well, so she didn’t need to hear the intimate details of my sexy time with Fenton.

“Girl, it sounds like you and old Dirty have mad chemistry. The way you’re limping around here tells me he put it on you.”

“You have no idea. Char. My body aches in places that have never ached before. The man had me literally twisted up in the game. Do you know he bent me in half and twisted my legs like I was a pretzel?”

“Bent you like a pretzel? Bitch, you just let him do whatever on the first night?”

“Trust me, the man brought out my inner hoe. I couldn’t help myself. Sure, he wanted to try some freaky shit, but I have to admit, half of the nasty things we did were my ideas.”

“You know you’re supposed to save the nasty shit until you are exclusive. Did I not teach you anything?”

“Girl, please. He already asked to be exclusive, so now what?”

Char’s eyes went wide, and her mouth dropped open. She looked at me in disbelief. “Well damn! He claimed that thang after one night? Where he at? He got a brother?”

Charlotte was happy for me. It had been a while since I had a real man in my life. Every man I had dealt with before was always getting it wrong. They either wanted to borrow money, were cheating or liars. At least Fenton was a stand-up guy, former marine and fine on top of that. He was the perfect package. I went on to inform Charlotte about the incident in the grocery store and she was livid. She insisted I call Lotus and bring her up to speed, as well. I hated having drama surrounding my name, but she was right, Lotus needed to know. It would no doubt be a topic of discussion at our next meeting. I tried to avoid addressing the room about certain topic because the room would end up in a frenzy, but it needed to be discussed. It was mid-morning before we finally wrapped up our discussion and phone call with Lotus. Just like I thought, she put the incident on the agenda for the next meeting. Charlotte and I were laughing at something silly she said when my phone chimed, alerting me that I had a text. I smiled like a fool before I could stop myself. Fenton was texting me.

Dirty: Hey babe. I miss that sexy body of yours already.

Me: Maybe I’ll show you some tricks later tonight.

Dirty: Wish I could, but gotta work. Double shift.

Me: Well, send me a pic for me to look at in your absence.

Dirty: What kind of pic?

Me: The dirtier, the better.

That little bubble kept popping up and going away, like he was typing and then changed his mind several times. I laughed at his dilemma. He wanted to please me, but he was at work. The next thing I knew, a picture popped up on my screen. It took me by surprise and I audibly gasped, causing Big Sexy to pay attention to what I was doing.

“Lil Mama, who are you texting? I know it better not be old Dirty.”

I giggled, not at her joke but at the text. Fenton had sent me a sexy pic exposing his glorious semi-hard shaft. The caption read ‘Thinking about what you did to me last night.’ If I had been alone, I would have reciprocated. However, with Charlotte all up in my business, I decided to chill.

“It is Fenton and what’s wrong with that?”

Be sure to enter this month’s giveaway for a chance to win book swag from some amazing authors!