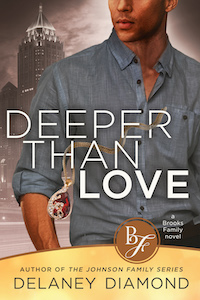 Nina Winthrop knows exactly what she wants from life: to help the less fortunate, to get married, and to have a family. She’s certain she’s found the perfect man to help her achieve all of those goals. They want the same future, and best of all…he’s not Reese Brooks.

Reese knows he screwed up when he broke Nina’s heart, and he’s lived with that regret for the past ten years. Now that she’s back in town, he’s determined to show her he’s the man she should be with. But does he have what it takes to change her mind? Or will he lose her for good to another man?

Reese shifted back and straightened in the chair. “Have you talked to my mother today?”
Nina appreciated the abrupt change in topic and breathed easier. “Yes. She chastised me for not coming to see her and invited me to brunch next week. I felt awful, but I’ve been preoccupied at Winthrop headquarters, trying to catch up with everyone, and then there’s a project I’ve been working on—the volunteer program I want to roll out company-wide.” She took a deep breath. “Anyway, I’m going to see her next week.”
“That will make her happy.”
“I should have made time right away.”
“She’s not going to love you any less.”
Sylvie liked Nina, and Nina liked her. Their mutual admiration didn’t waver after she and Reese broke up.
“She doesn’t love me.”
“Yes, she does. She wanted you as a daughter-in-law.” He took a sip of beer.
Nina’s eyes opened wide. “What?”
“You didn’t know that? She still does and was disappointed when we broke up.”
“We were teenagers.”
“Doesn’t matter. You were her idea of the perfect daughter-in-law. After we broke up, she gave me the cold shoulder for a few weeks.”
Her mouth fell open. “Stop.”
“I swear. Ask Simone or Ella if you don’t believe me. I’m still not sure she’s forgiven me for screwing that up.”
“You’re exaggerating.”
“Ask her when you see her next week.”
“I’m not asking your mother that.” She side-eyed him.
Reese laughed, and Nina relaxed a little more. She could do this. She could be friends with him. They could go back to normal. They had to.
“I have an idea. How about I meet you over at my parents’ place, then you and I can get some ice cream and hit Centennial Park like we could have done if you’d let me know about your few trips back.”
She had returned to the States a handful of times over the past three years but never notified Reese. “How did you know I’ve been back?”
“Come on, you really think I didn’t know the times you came back?”
She should have known. They had mutual friends, and Stephan and Lindsay were close.
“I know you came back and didn’t see me, didn’t call.”
Nina shifted guiltily. “They were short visits. I didn’t have time.”
“You could have made time. You could have called, but we’re not going to dwell on that. I’ll meet you at my parents’ house next week. But tonight, you owe me a dance.” He pushed back his chair and stood.
“Owe?”
“Yes. Since you never called when you visited over the years.”
“You don’t like to dance.”
Reese extended his hand. “I’m making an exception today. Don’t leave me hanging in front of all these people.”
“That’s blackmail.”
She placed her hand in his and instant electricity coursed through her palm. Heat flamed her chest, and on shaky legs, she followed behind Reese and noticed the eyes that tracked their movement to the dance floor, as if everyone who knew about their past watched to see the outcome of a simple dance.
She allowed him to pull her close, but when he rested his hands on her waist, she tensed.
“Relax. Put your arms around me,” Reese whispered. His mouth to her cheek was a ghost of a touch. She barely felt it, but her body throbbed with the scent of hops on his breath and the prospect of his lips on hers.
Her belly trembled as he squeezed her closer, turning them in a slow circle and smoothing his hands up and down her spine. They were standing too close—torso to torso, pelvis to pelvis, thigh to thigh.
Nina released a chest-stretching sigh of frustration and longing. How could he still do this to her after all this time? How could he still make her feel so much when she needed to have nerves of steel and wanted to be indifferent to the memories he reactivated in her mind. Memories that reminded her he wasn’t all bad.
He could be thoughtful and funny, and as a couple, he always did what other boys didn’t. Very affectionate, he held her hand and kissed her in public. If they were chilling on the sofa, he’d pull her legs across his as they watched TV, or their shoulders had to touch as they ate dinner beside each other in a booth. She didn’t always remember to reach for him, but he always remembered to reach for her—walking down the sidewalk, at the movies, or giving her fingers a squeeze of encouragement.
Suddenly, Nina became aware that people were leaving the dance floor. She’d been so lost in memories that she didn’t notice the music had stopped. She eased away, and Reese let her go.
His jaw hardened, and emotion shadowed his dark brown eyes. “Thanks for the dance,” he said huskily.
Nina nodded. “Sure.”
She backed away and then hurried from the dance floor, tossing a weak but reassuring smile at her sister, whose worried eyes followed her across the carpet.

Be sure to enter this month’s giveaway for a chance to win book swag from some amazing authors!